This document provides information on installation and setup of Quartus II v8.1 under Ubuntu 8.04 (Hardy Heron). At the end of this how-to you should be able to use Quartus II IDE both to design digital circuits and to load them in Altera devices using the following configuration:

Although it is possible that the following instructions work under a different version of Ubuntu, it is very important to use the indicated version of Quartus II software, as it has been reported that previous releases have some problems during installation on Linux flavors that are different from the ones officially supported (Red Hat Linux Enterprise 4/5 (32/64 bit), SUSE Linux Enterprise 9 (32/64-bit) and CentOS 4/5 (32/64 bit)).

At the time of writing this document, Altera provides Quartus II software in two different versions:

Although Quartus II Subscription Edition needs a license in order to work, several command line tools that are provided as part of the installation can be used without the need of it. Two important commands of these tools that we will use are jtagd and jtagconfig. jtagd communicates with and loads compiled designs into Altera devices using JTAG standard in two different connection modes:

jtagconfig allows us to register and configure connection cables and Altera devices, and setup jtagd to act as a JTAG server

The following is a big picture of the steps that will be explained in the following sections:

Setting up Quartus II Web Edition 8.1 in the Windows guest

You should now be able to run Quartus II on your Windows guest: 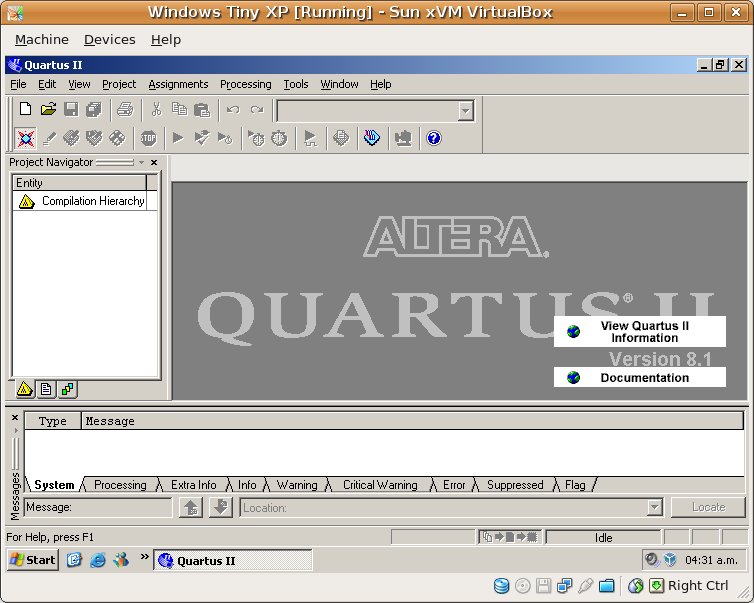 Setting up the JTAG server

If it is not pointing to bash, delete existing link and create a new one

Connect and turn on the Altera device to the host computer. Follow the instructions according to the connection cable you are using:

You should now be able to execute jtagd and jtagconfig, that should be found in $ALTERA_HOME/quartus/bin. You will also be able to execute Quartus II IDE with free 30 day trial. In this version, binary compilation and design loading into Altera devices are disabled.

Create a service for jtagd

jtagd should be run as a service to be able to work as a JTAG server. The correct way to do this is installing jtagd in the system run levels mechanism:

If everything is going ok you'll be able to connect successfully with your Altera device as [[UbuntuHelp:[test your installation|before]]]

If your setup was successful, you should have a jtagd process listening in port 1309

Create a virtual network between guest and host systems

In this section we will create a simple virtual network between guest virtual machine and host computer using VirtualBox's HIC Networking. In order to keep this how-to as simple as possible, the network will just allow communication between guest, host and other computers connected to the same network. No bridge configuration will be covered here. If you would like to setup a different type of virtual network, please refeer to VirtualBox|networking howto. Just make sure that the configuration you choose allows communication between guest and host systems (you should be able to ping the guest from the host and viceversa). In order to create the virtual network, we will provide two scripts to VirtualBox: onen will create and setup a temporal virtual network interface (so-called TAP interface), and the other one will shutdown and remove the created interface from the host system. The following hipothetic settings will be used to setup the virtual network configuration:

The script shown above creates and sets up a temporal TAP interface in the host system. It also adds routing information that allows the kernel to identify the created interface (using the IP 192.168.1.200). Save it in a location of your choice and make it executable.