Some people using AppleTalk printers or running Mac OS 9 still want to use AppleTalk. While the AppleTalk protocol suite is considered deprecated by Apple these days, the large number of legacy devices makes discarding the protocol unfeasible.

Installation is easy, just use apt-get to install Netatalk.

And wait for netatalk to run. If you get an error similar to:

Then try adding your AppleTalk connected interface (eth0, eth1, wlan0 etc) to the end of /etc/netatalk/atalkd.conf

by typing the appropriate interface at the end of the file and try starting the services:

Getting your Ubuntu installation to print to an AppleTalk printer is relatively easy. First, provide CUPS with a working PAP (the Netatalk printing methodology) backend. You may download one from here. Once you have that file, cd to where that file is stored and:

Now all you need to do is restart CUPS. You can do this with

This should provide you with AppleTalk printing. Now, set up the printer by opening the Printing admin tool (System>Administration>Printing) and clicking the "New" button. Before we go any farther we need to find the device URI, this can be accomplished by calling the backend without any arguments

We want to take the device name and convert it into a pap address to use as the device URI. This is done by using the prefix "pap://" and converting any spaces into "%20". So in this case it would be

Note that in this case there was a space after the word "Series". This is important! Now, under Devices select "Other" and enter the device URI we just found. 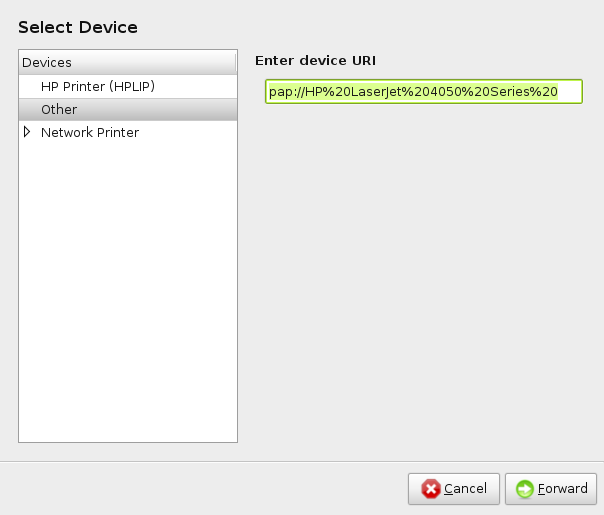 Click forward. Select your printer Make and Model and whatever options it may have. Once completed, print a test page to see if it works. There you go. AppleTalk printing from Ubuntu! Enjoy.

If you are having trouble finding the correct URI for your printer first call the backend without argument :

An Ubuntu node will show up on the AppleTalk network as 'localhost'. This is due to 'hostname -s' returning localhost instead of using the real name (in /etc/init.d/netatalk). To remedy this, change the appropriate line in /etc/hosts and move the real hostname in front of 'localhost.localdomain', for example:

There's an open bug report documenting the problem with said order in /etc/hosts that is causing trouble with other programs, too. https://launchpad.net/distros/ubuntu/+source/netcfg/+bug/8980

If nothing is coming out of your printer, debug the pap backend and view the log to see where problems may be coming from.

and uncomment out the lines that write out to the log file. (Delete the ##'s on lines that contain "echo") restart cups and try to print another file

Now check the logs for any problems

NOTE: if you see a line that says "NBP Lookup failed"

You must restart netatalk and your printer should work again

The following may be needed if you have more than one AppleTalk Zone or are having general problems. With netatalk installed, run nbplkup to find the names of the AppleTalk printers on your network. Make a note of these names. Edit /etc/cups/printers.conf (as root) to add the printer. Here's an example for a printer named "Laser Writer Select 360". The "LW360" you see is the name you'd like to see in Ubuntu. It can be almost anything. The "Laser Writer Select 360" name you see in the URL must be exactly the name that nbplkup gave you for the printer.

This example assumes a single, default AppleTalk zone. If you have more than one zone, the printer URL should end with %40 followed by the zone name.

Mozilla uses a newer Ghostscript engine than most Apple printers will support. If an error page stating this comes from the printer when you try to print from Firefox/Mozilla, change the default print string in Firefox/Mozilla's printing prefs to