Several vendors for 1wire hardware exist, but the components all come from Dallas/Maxim. Since I've had experience with one vendor in particular, http://hobby-boards.com, I'm aware of a couple of others. This page intends to run down the various offerings, and provide some explanation. If you can speak for the offerings of other vendors, please advise.

1Wire technology uses a data line (and a ground) with these tiny, tiny sensors and switches who act like network cards to communicate on the one line. A 64-bit number is burned into each and every one to identify them, so the host that is listening/controlling them can keep them straight. Software exists for various OSs and various purposes; here, we discuss the hardware.

All 1wire sensors need a host to talk to, and to power the bus, at a minimum. But since we want to learn what they're telling us, that's not an issue, is it? Two kinds exist: 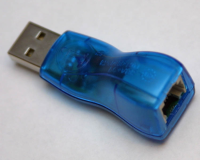 The USB adapter connects to any USB port your machine might have. It's pretty straightforward, but if vibration is a concern (as in vehicles) you'll probably want a serial version, instead. Note: If you're using OWFS, a USB adapter requires you run the process as root; this may or may not be a problem for you. 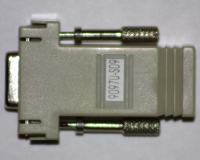 Serial adapters look much like every RS-232 adapter you've ever seen, with nice screw-ins that keep the thing attached to your port. They have the same speed as the USB, and seem to be a little more rugged.

There's already a world of information on the individual parts themselves; in fact the number is kinda overwhelming. So it's simpler to list parts from a vendor, though I don't want to limit it to just one: this is a howto, not an ad campaign. The boards, which take care of all the setup, grounding and mounting issues that I'll be reporting all come from http://hobby-boards.com. Nothing stops you from using the individual components; in fact many rechargable batteries are getting one, each to count the number of times they've been charged, current and voltage, and identity. The host adapters are at the repair depots. Just another example of this clever, clever technology. But I list various boards here because it simplifies the project; just add what amounts to a network wire from board to board and you're taking readings in seconds. Let's look at the boards:

Here are some of the boards from Hobby-Boards.com to give you an idea of their capabilities. Many just use 'parasite' power on the LAN-type wire that connects them. Others require an outside (12VDC) power supply to put it on the lines.

This allows you to separate the line into branches. Some boards like the motion detector take a lot of bus-time, and can complicate traffic.

This board lets you control four switches that can handle 3A, at a distance of 300 feet from the hub. (The hub can be another 300 feet away from the host, for example.)

This board counts switch closures, like, the number of times a door has been closed, for example.

This multifunction board lets you get a good idea of the climate all in one board. Temperature is pre-calibrated, and by default is in degrees Centigrade. (Relative) humidity is in percent.

This is how you know it's raining.

This module lets you guage lighting from great distances. When it gets close, you can tell the relay board to shut things down or close windows, etc.

This board lets you connect to a 2x20 or 4x20 standard LCD screen. This is surprisingly useful.

The display board uses a standard LCD (Hitachi) display; I believe this company resells these- they don't make or modify them. The combination gives you a slick, simple way to control irrigation around the house, study-and-improve indoor climate, or even control the A/C distribution throughout the house. Back to 1wire Meta-page