Wireless support is one of the major issues in Linux. Either there is no driver written for Linux yet, or the manufacturer did not make his proprietary driver open to the public. The Linux kernel contains a lot of drivers already in it. So your wlan either works out-of-the-box, or you have to invest some time, learn something new, activated the wlan with a cry of success, or go into a dark room and sit in the corner. This HowTo is not meant to be complete and comprehensive. It should provide some basic starting ideas for the new Ubuntu user who wants to know how to proceed.

The first step should always be to check the in-build drivers of Ubuntu. So go to System - Administration - Hardware Drivers and see if your wlan device is listed there and if the drivers for it are disabled. If it is the case, and you have a working wired connection - which is working almost always for sure - you can activate the drivers; Ubuntu will download them automatically. 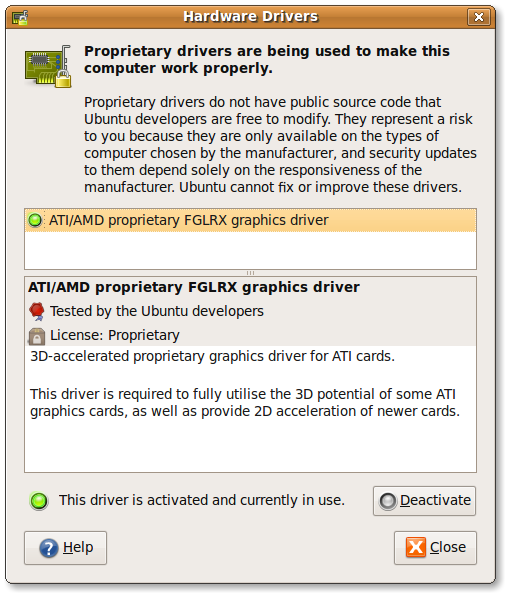 If your driver is not listed there, the fun begins.

Ndiswrapper is a tool which allows you to use your windows wlan drivers in Linux. It is even on the Live CD. So if you do not have any Internet connection whatsoever, you can still install it. Let's assume you have just installed Ubuntu. Now go to System - Administration - Software Sources and see if Installable from CD-Rom is checked. Close and Reload. You might get an error because Ubuntu cannot access the Internet to update all the other sources, but that is OK. The most important part is that the CD is set as one source. Go to the Terminal; Applications - Accessories - Terminal. And run this command: sudo apt-get install ndisgtk ndiswrapper-utils-1.9 ndiswrapper-common Perhaps you can even install only ndisgtk and the two other ones will be installed with it, don't remember exactly from the top of my head, but they should. Anyway... after the successful installation go to System - Administration - Windows Wireless Drivers. 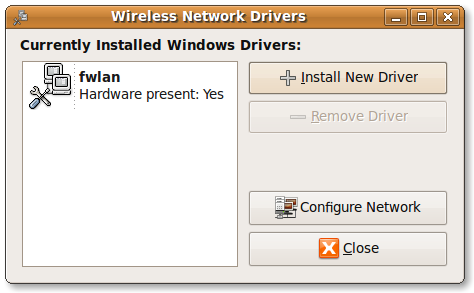 The ndisgtk tool needs the .inf file from your windows drivers. If you have a folder containing the drivers, for instance on your Desktop, click on Install New Driver and navigate to the .inf file on your Desktop. If everything goes according to the big plan, you should see a Hardware Present Yes on the left side. Here is a comprehensive site dealing with the usage of ndiswrapper: Ndiswrapper|Guide If not let's restart the network and see if the information will be updated. Open the Terminal and run: sudo /etc/init.d/networking restart Check with the command iwconfig if your wlan device is listed there. Also run this command: sudo lshw -C network Look for a line similar to: broadcast=yes driver=ndiswrapper+fwlan If all this fun did not help, the really real fun begins!

Let's have a look at this very important page: www.ubuntuhcl.org This page organizes and documents the compatibility of hardware devices with Linux/Ubuntu. Use the categories to browse to the wireless networking. Do you find your device there? If there is no review available let's continue our search. Main Page of Community Help First type in your device into the search field, for instance Broadcom 4311. Of course search for yours. Any hits? If yes these are probably guides dealing with setting up your devices. Now is the time of the Ubuntu Community. These guides are sometimes a little "too much" for the Ubuntu beginner. If you find the suitable guide for you but it is written in a different language, post on the Absolute Beginner Talk of the Ubuntuforums. and there will be users for sure who will help you. Another great starting point to solve wifi issues is this site from the Ubuntu community documentation: WifiHowTo. I cannot explain at this point how to proceed further because there are too many possibilities which must be discussed individually on the forums or via the irc.

But at the end I will give you some terminal commands which will help you and the helpers on the forums to get a better picture of your current network status. It is a good idea to post as much information as you can get. It is sometimes very tiresome to pull every bit of information out of the original poster.

Hopefully not the last words... The support of wlan devices has very much improved since the starting days of Ubuntu. Today the majority of devices is supported out-of-the-box, some require tweaking which can be done with no headaches, some guides are just to complicated for the first time user (use the help on the forums), and some wlan devices are just beasts which can be easily replaced with working devices. That's also my last advice. Instead of spending sleepless nights with complicated code, ask on the forums which device the users are using and which they can recommend, speaking from their own experience. I had a Broadcom 4311 which just decided not to work. Now it lies in the cupboard. Good Luck!