Rather than have an entire separate Windows desktop, you can run virtualized programs directly on your Linux desktop using the latest (version 1.5.0) rdesktop package that comes with Ubuntu 7.04, and Windows XP Professional's Terminal Services feature. 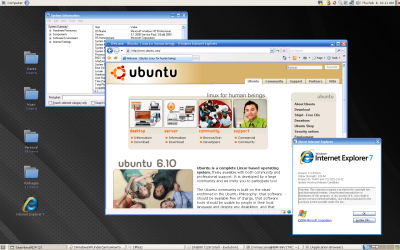 This makes any connections to the localhost port 3389 be directed to the QEmu VM on port 3389, where Windows Terminal Services will run.

For QEmu, use 'localhost' for <IP of VM>. For VMWare and for VirtualBox, use the IP address noted down earlier. A large window will pop up briefly with the Windows login screen, then your application should start in its own window. You can now create a desktop launcher to run the command above in future, when the VM has been started. High-resolution .PNG icons for Windows applications are available from DeviantArt.

To help Windows apps look at home in Ubuntu, you may configure Windows to use the Ubuntu Human theme. 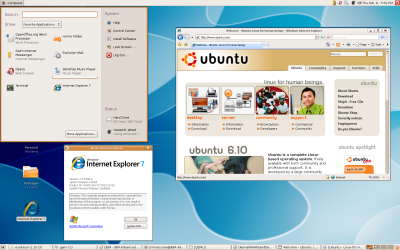 If using QEmu, use 'localhost' rather than the IP of the VM. The new theme will take effect after the login screen. Some themes that are larger or smaller than default might show a few lines of the Windows wallpaper color.

Save that batch file, and call it via your rdesktop command. IE will run, and when you close the window you'll be automatically logged off.