This is not the recommended way to install the NVIDIA drivers - please see BinaryDriverHowto/Nvidia for the supported method. Any problems that occur after using the following instructions should not be reported to the launchpad bug area. If the drivers were downloaded from the NVIDIA web site then the NVIDIA Linux web forum is an appropriate place to report issues. Other places for binary driver manual installation support can be found on the Community Support page.

Sometimes using the drivers in the Ubuntu repositories is not the best option. Here are some reasons to install the NVIDIA restricted drivers manually:

The purpose of this page is to detail the necessary work to install the official NVIDIA Linux driver from www.nvidia.com. Note that this will not fix resolution problems, for that you need to see the FixVideoResolutionHowto.

First, make sure that your /etc/X11/xorg.conf is backed up.

Next, download the right drivers for your platform from the driver download page or the NVIDIA Unix Driver portal and save them to your home directory. Open a terminal, and run the following command:

The above command might print an error similar to the following:

In such case you could try following

The following command will then probably need adjustment also.

Using Synaptic or apt-get, uninstall nvidia-glx, nvidia-glx-legacy, nvidia-glx-new and nvidia-settings if they are installed. Open the the /etc/default/linux-restricted-modules-common file with an editor, in Ubuntu use

and in Kubuntu use

and find the line:

Note: In Ubuntu 7.04 the nvidia_new is explicitly required in addition to nv on the DISABLED_MODULES line. See this launchpad bug about lrm-manager failing to disable the nvidia_new module when nv is specified alone. Additionally you may need to manually remove the hidden /lib/linux-restricted-modules/.nvidia_new_installed file.

The next step is to edit your xorg.conf file. This may not be needed in Hardy Heron and newer, but check anyway, esp. if you have upgraded from older versions of Ubuntu. In Ubuntu:

Find the section Module and comment out DRI using the # symbol, such as in the following example.

Now find the section Device, and change the Driver from nv (or vesa, fb, etc) to nvidia, as in the following example, and then save it.

Now that your Xorg.conf is saved, we need to shutdown the X11 server so that we can install the new drivers. To do this, save your work and press ctrl-alt-f1, and log in. Then run the following command to shutdown X11. Make sure your work is saved, Gnome/KDE is going to shutdown too. For Ubuntu:

Useful tip, typing the first few letters and hitting the Tab key will auto-complete the name, saving you from using wildcards like * First navigate from the tty to the directory where you saved the install file (I will use /path/to/installer), then set executable permissions on it:

You can start the install script with the following command:

The installer will now walk you through the steps required. Assuming success, you can now restart your X11 server using: For Ubuntu:

The X server will start in low-resolution if the nvidia driver is not loaded on boot, so

Every time a new kernel comes out you will probably have to manually rebuild the NVIDIA binary driver kernel module. This can be done by booting to the new kernel and then running:

on the previously downloaded NVIDIA installer file. Additionally, any time that the mesa packages are updated you will have to reinstall the NVIDIA .pkg again.

Sometimes it is necessary to uninstall the driver, like before a version upgrade of Ubuntu or if the installation fails or is no longer needed. For a manual install, you can remove the driver using the installer file:

You will probably be asked to reboot the computer.

When trying to start X, if you get an error about nvidiactl (you will need to see the X log), try the following:

If you want to go back to the Restricted Manager method after performing the above instructions, do this

If the installer fails, go through the following checklist

Hardy Heron and newer use EnvyNG, older versions of Ubuntu use Envy Legacy - both can be found at http://albertomilone.com/nvidia_scripts1.html

EnvyNG is available in the Universe repository in Hardy Heron and later. Older versions of Ubuntu using Envy Legacy can download the .deb file from Envy's website. After installing, EnvyNG can be found from Applications->System Tools->EnvyNG in Ubuntu. You will want make sure you select NVIDIA drivers, not ATI: 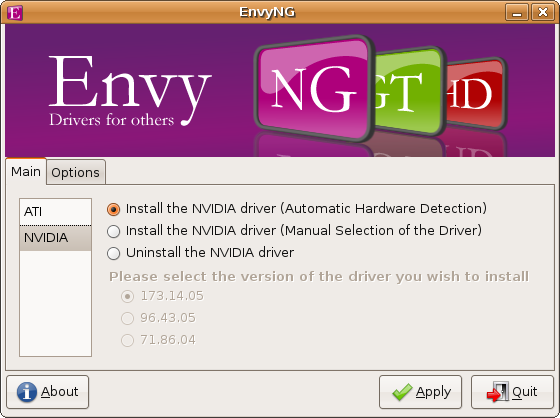 Navigate there and click Apply, and the program will do the rest. You can then configure your card as described under the complete manual install section above.

Sometimes it is necessary to uninstall the driver, like before a version upgrade of Ubuntu or if the installation fails or is no longer needed. With Envy/EnvyNG, you can uninstall the driver directory from the program, see the above screenshot - it is the third choice. You will probably be asked to reboot the computer.

There is Nouveau: an open source driver with acceleration for NVIDIA cards. Currently (2008), there is 2D-support, and a very limited 3D support for extremely lucky developers. See http://nouveau.freedesktop.org/wiki/. Users that have installed the proprietary driver can help the development of Nouveau by sending information about their cards, see http://nouveau.freedesktop.org/wiki/REnouveauDumps.

Here are some other resources of interest: