This section shows you how to accomplish this task using either the Graphical User Interface (GUI) or by using the command line (terminal).

Perhaps the most user friendly way to change the time zone of your Ubuntu system is to use the Graphical User Interface (GUI). 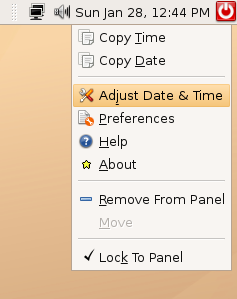 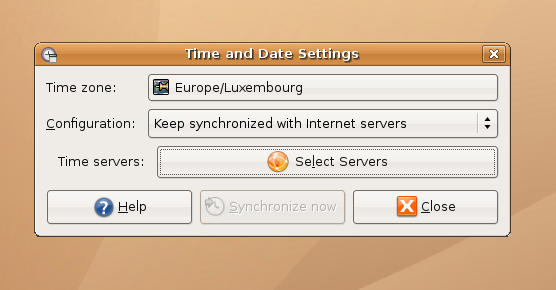 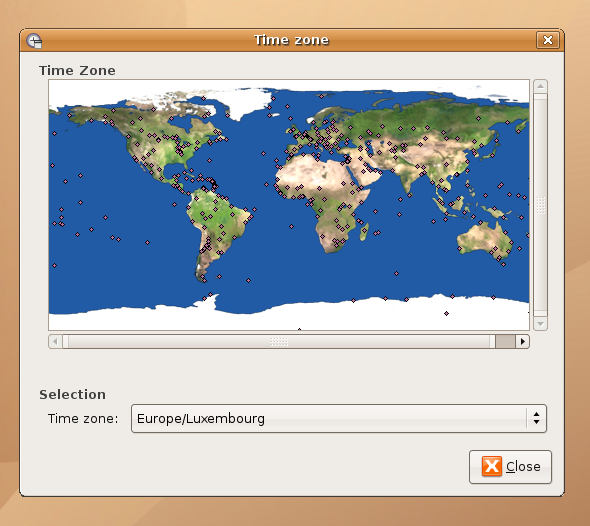 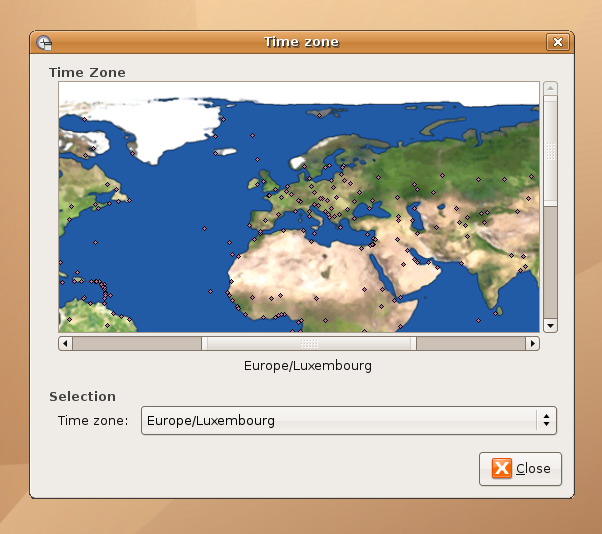 Using the command line, you can use dpkg-reconfigure tzdata.

Find out the long description for the timezone you want to configure. Save this name to `/etc/timezone` and run `sudo dpkg-reconfigure --frontend noninteractive tzdata`:

This can be scripted if required.

This page describes methods for automatically keeping your computer's time accurate. This is extremely useful for servers, and is also recommended for desktop machines. Network Time Protocol (NTP) is a UDP/IP protocol for synchronizing time over a network connection. Basically a client requests the current time from a server, and then uses the servers response to set its own clock. Beyond this simple description, there is a lot of complexity. There are multiple tiers of NTP servers, with the tier one NTP servers connected to atomic clocks (often via GPS), and tier two and three servers spreading the load of actually handling requests across the internet. The client software is a lot more complex than you might think as it has to factor communication delays, and adjust the time in a way that does not affect the other processes that run on the system. Luckily all that complexity is hidden from the user.

This is how to enable NTP time synchronization using the GUI (Graphical User Interface). 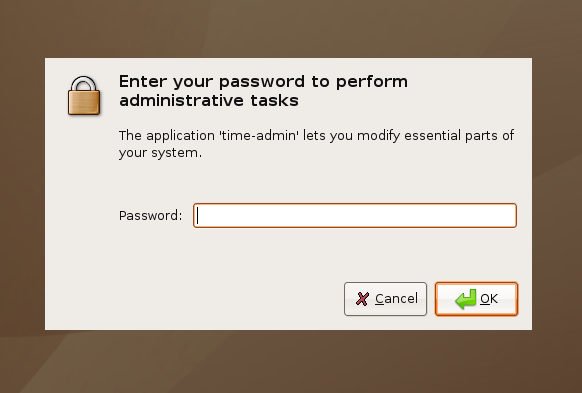 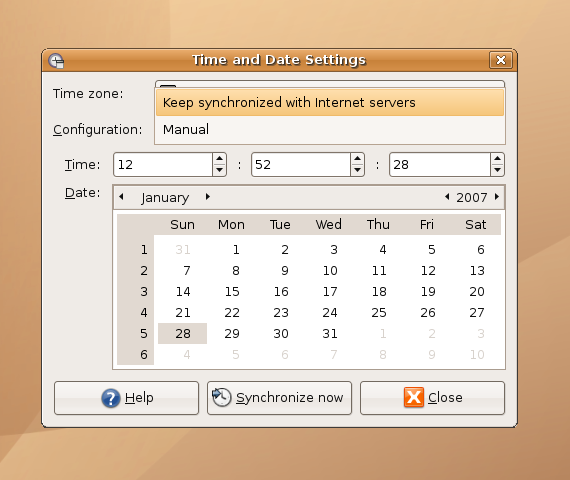 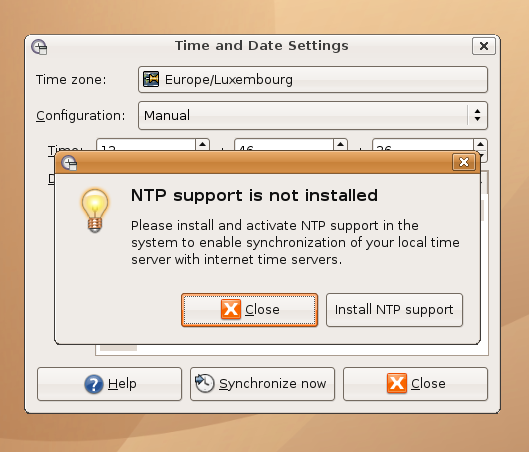 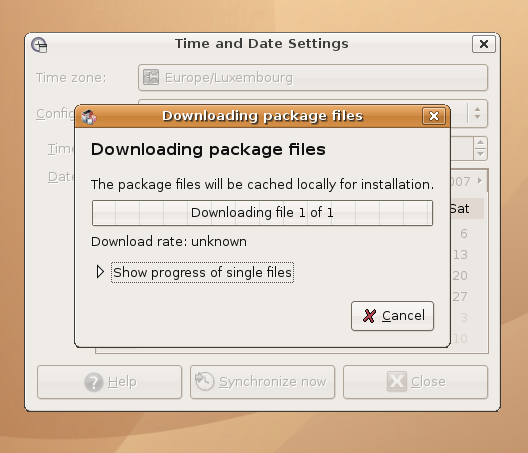 Ubuntu comes with ntpdate as standard, and will run it once at boot time to set up your time according to Ubuntu's NTP server. However, a system's clock is likely to drift considerably between reboots if the time between reboots is long. In that case it makes sense to correct the time occasionally. The easiest way to do this is to get cron to run it every day. With your favorite editor, create a file `/etc/cron.daily/ntpdate` containing:

Make sure that you make this new file executable:

ntpdate is a bit of a blunt instrument as it can only adjust the time once a day in one big correction. The ntp daemon ntpd is far more subtle as it calculates the drift of your system clock and continuously adjusts it in small increments. Using ntpd there are no large corrections that could lead to inconsistent logs for instance. The cost is a little processing power and memory, but for a modern system this is negligible. To setup ntpd in versions of Ubuntu 7.04 and higher

In both cases above, your system will use Ubuntu's NTP server at `ntp.ubuntu.com` by default. This is OK, but you might want to use several servers to increase accuracy and resilience, and you may want to use time servers that are geographically closer to you. 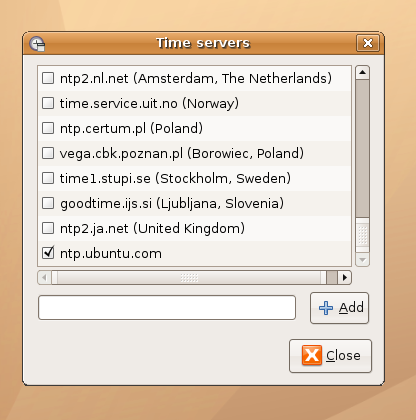 Change the contents of `/etc/cron.daily/ntpdate` to:

Change the contents of `/etc/ntp.conf` to include additional server lines:

You may notice `pool.ntp.org` in the examples above. This is a really good idea which uses round-robin DNS to return an NTP server from a pool, spreading the load between several different servers. Even better, they have pools for different regions - I am in New Zealand, so I use `nz.pool.ntp.org` instead of `pool.ntp.org`. Look at http://www.pool.ntp.org/ for more details. You can also Google for NTP servers in your region, and add these to your configuration. To test that a server works, just type `sudo ntpdate ntp.server.name` and see what happens.

To make MS Windows calculate the time from the hardware clock as UTC. Create a file named attachment:WindowsTimeFixUTC.reg with the following contents and then double click on it to merge the contents with the registry:

To make your Ubuntu system read the hardware clock as 'local'

Which configuration file is it using?

By default NTP uses `/etc/ntp.conf`. If `/etc/ntp.conf.dhcp` exists then the NTP daemon assumes you're using DHCP to redefine the NTP settings and it uses that file instead.

How do I configure NTP to use DHCP

Your DHCP server must be configured to supply NTP servers (`man dhcpd.conf` may be helpful). Your client must be configured to use the supplied NTP servers. To do this, add `ntp-servers` to the `request` (or even `require`) line in `/etc/dhcp3/dhclient.conf`. You may wish to use the `default` and `prepend` features as well to provide default/additional NTP servers. Please see `man dhclient.conf` and `man dhcp-options` for details.

NTP most commonly 'fails' if it cannot resolve the servers in its configuration file at startup (this can happen if DNS isn't available during boot). Also, if NTP is unable to keep the local clock reasonably accurate it gives up and terminates (see below). Try `sudo /etc/init.d/ntp status` to check if NTP is running, and `sudo /etc/init.d/ntp restart` to restart it if necessary. I have various systems on unreliable networks so I use a simple script to bounce NTP if needed:

Which servers are you using?

Run `grep server /etc/ntp.conf` or `grep server /etc/ntp.conf.dhcp` to figure out which servers you're trying to use If your network or ISP have an NTP server they should be listed here. Failing that, try ntp.ubuntu.com and/or the NTP pool servers (http://www.pool.ntp.org/). 3 or 4 servers is plenty, and don't use a server without permission (see http://en.wikipedia.org/wiki/NTP_vandalism).

Can these servers be resolved?

If `host $servername` fails then you may have DNS issues that need to be fixed (`$servername` is the name of a server listed in your configuration file, see above).

Can these servers be reached?

If `ntptrace $servername` fails then you may have routing/firewall issues that need to be fixed (`$servername` is the name of a server listed in your configuration file, see above). NTP uses UDP port 123, make sure these packets can are properly NAT-ed through your gateway if necessary.

What's NTP up to?

`ntpq --numeric --peers` --numeric removes the DNS lookups. You can leave it off, but don't be surprised if the resolved names don't match names in the ntp.conf file. Ideally you want a `*` and a few `+`'s in the fist column and a `reach` of 377 (see http://www.ntp.org/ntpfaq/NTP-s-trouble.htm#Q-MON-REACH) `delay` is in milliseconds. It should be < 1 for local network servers, < 10 for ISP servers over DSL and ideally < 100 for wireless. `offset` is in milliseconds and is the current best guess of the time difference between your system and the server. The smaller the better! `jitter` is an estimate the the local clock frequency error. The smaller the better. If it's consistently high then your system may be drifting (see below)

Why does NTP keep resetting/failing?

NTP attempts to fix your local clock to keep accurate time. If your local clock drifts too fast (usually HW problems or IRQ lockups or somesuch) then NTP either keeps resetting your clock or gives up and terminates. Fix the drift problem and NTP will behave.